Kigali Agreement: how COOLNOMIX® will enhance it 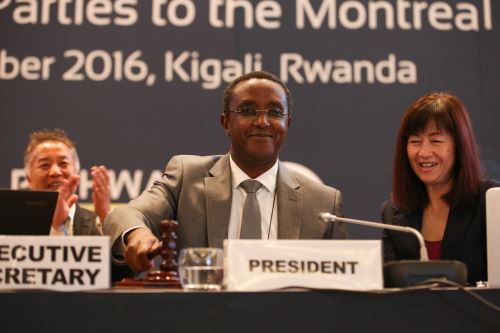 A new milestone in the fight against climate change has been reached last week in Kigali, Rwanda, and COOLNOMIX® can make it even more powerful.

Delegates from 197 countries from all over the world convened for the 28th Meeting of the Parties to the Montreal Protocol on Substances that Deplete the Ozone Layer. The negotiations led to an amendment to the Montreal Protocol aiming at progressive reduction of use of hydrofluorocarbons (HFCs) in cooling systems. According to the UNEP, this is “the single largest contribution the world has made towards keeping the global temperature rise "well below" 2 degrees Celsius, a target agreed at the Paris climate conference last year.”1

HFCs are one of the most harmful greenhouse gases and are mainly used in refrigeration and air-conditioning to substitute the ozone-depleting fluids such as chlorofluorocarbons (CFCs). During the negotiations in Kigali, developed countries agreed to phase out HFCs by 2019 while developing countries will start doing so by 2024, and 2028 for the warmest ones. By 2040, all parties will have reduced their respective emissions by 80-85%.

COOLNOMIX® not only will keep delivering astonishing energy savings regardless of the refrigerant fluid:

But by doing so will also contribute massively to the reduction of carbon dioxide emissions into the atmosphere thereby enhancing the effects of the HFCs reduction.

More than just promises, the Kigali agreement is legally binding and will hopefully lead to a series of other powerful Climate Change agreements. "This is about much more than the ozone layer and HFCs. It is a clear statement by all world leaders that the green transformation started in Paris is irreversible and unstoppable. It shows the best investments are those in clean, efficient technologies", said UN Environment chief Erik Solheim.1

As a world-beating energy saving technology for refrigeration and air-conditioning, COOLNOMIX® will enhance the progress made to reduce the emissions of greenhouse gases and will keep delivering astonishing savings all over the world. COOLNOMIX® is a sound investment for everyone who wants to be part of the Global Change.